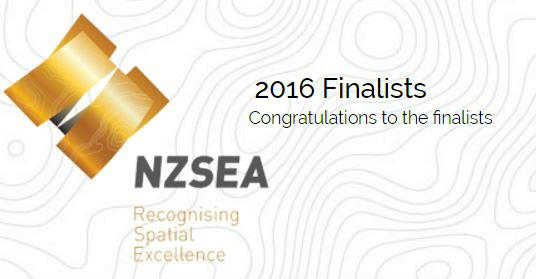 They are the only awards in the region that combine recognition of both individuals and organisations engaged in the surveying and spatial information industries.

The winners in each category in the New Zealand awards will be announced at a dinner to be held at Te Papa Tongarewa, Wellington on 16 November 2016.

In addition to awards in each category there is a Supreme Excellence Award, the winner of which is selected by the judging panel from one of the organisational category winners that the panel judges “represents the pinnacle of achievement in the spatial industry” and that attains, in the Judges’ opinion, “the highest level of excellence or achievement.”

This is the third year the contest has been run and it attracted 63 entries, almost double the number of entries received in 2015. Hadyn Smith, one of the event organisers, said the increase was a graphic illustration of the growing importance of spatial data and the role it plays in everyday business.

“Spatial data is everywhere today but it’s mostly invisible because we take it for granted,” Smith said. “Map apps on our smart phones, calling for an Uber ride or tracking our pizza delivery aren’t regarded as anything out of the ordinary, but without spatial data they just wouldn’t happen.”

Dave Pimblott, a member of the NZSEA judging panel, said the entries submitted this year covered a diverse range of industry sectors and were world class, both conceptually and in their application.

“The quality of entries this year are illustrative of a stunning array of geospatial initiatives across the broadest possible range of business disciplines. It is heartening to see entries from not only government and private industry, but also from not-for profit agencies,” he said.

“There were many excellent examples of huge operational, and economic benefits from the implementation and use of geospatial initiatives within a diverse range of organisations.”

Postgraduate Student of the Year Award