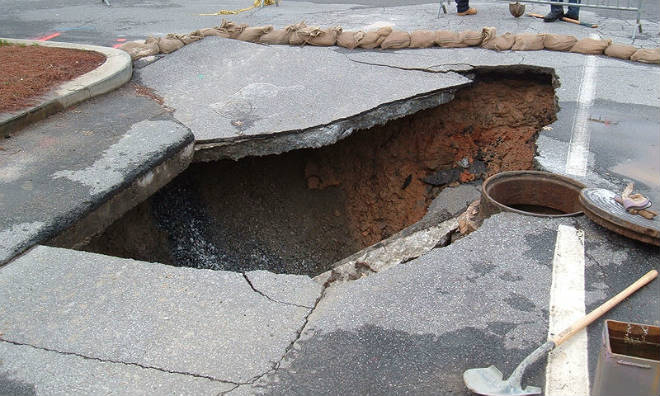 Do you know what a cenote is? Or a swallet? Ever heard of a doline? I hadn’t, but I’m certainly familiar with the phenomenon to which all refer, as I’m sure you are.

They are all terms for sinkholes: those cavities that can suddenly and often disastrously appear in the earth as the result of some sort of collapse in the ground beneath. The most common causes are erosion caused by a burst water or sewer pipe, erosion of soluble carbonate rocks and the collapse of old mine workings.

Sinkholes come in all shapes and sizes. The world’s largest is the Qattara Depression in Egypt: an almost unbelievable 80km by 120kms and 133m deep.

On 27 November 2016 a burst water main in the South London suburb of Lewisham opened up a sink hole: just a small one but big enough to strand a bus full of tourists.

On 5 December in San Antonio Texas, there was a much more serious sinkhole incident and it seems as if the underground infrastructure was to blame: it occurred at the junction of two sewer pipes that had been replaced a year earlier. An off-duty police officer had the misfortune to drive into the 3.6-metre deep, water-filled hole and died at the scene.

Just two months earlier a couple in Adelaide narrowly escaped a similar fate when a sinkhole opened up beneath their parked car and swallowed it. Fortunately, they were unharmed. The culprit on this occasion was an old lead mine –one of the first in Australia dating back to 1841.

Sinkholes are surprisingly common, especially in certain areas where the geology favours their formation.Huntsville Alabama, for example. Following the lasted sinkhole appearance there Dr Ben Ferrill from the city’s Planning Department was reported saying there were likely hundreds in the area because the ground is made up of limestone and has many underground caves.

The City of Huntsville takes the sinkhole problem so seriously it has adopted sinkhole standards: developers must identify them before building, and cannot build within eight metres of one. Homeowners can even take out sinkhole insurance.

Florida is another sinkhole-prone location, where there are 17 reported claims every day under sinkhole insurance. According to the report, the US states with the most sinkholes are Alabama, Florida, Kentucky, Missouri, Pennsylvania, Tennessee and Texas.

Thiswww.thesun.co.uk/news/16…a-car-park of two people standing by a van in China and disappearing into a sinkhole shows just how suddenly they can occur (fortunately they were unhurt). However, there are early warning signs: “sagging trees or fence posts, doors or windows that no longer close properly, and rainwater collecting.”

None of which, of course will help you if you are unfortunate enough to be driving down a road that suddenly disappears into a sinkhole.