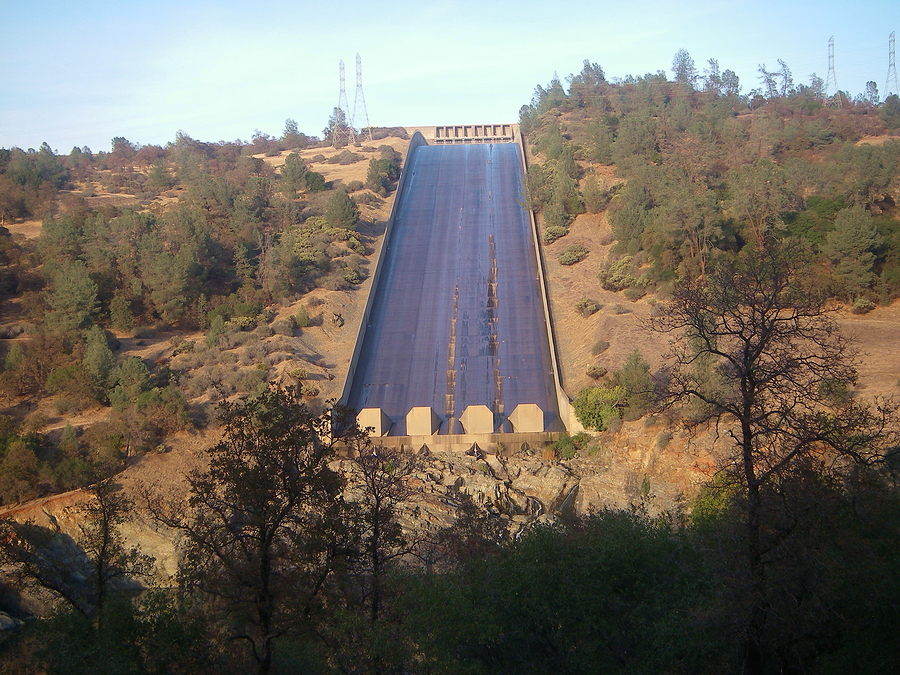 With a height of 234.7 metres California’s Oroville Dam is the tallest dam in the US and the body of water it holds back, Lake Oroville is the second largest man-made lake in California. It serves three functions: water supply, hydroelectricity generation and flood control. It’s estimated that the floods it prevented between 1987 and 1999 avoid a damage bill that would have topped $US1.3 billion.

However the dam is now on the verge of precipitating a disaster of gigantic proportions. After weeks of heavy rain the dam is full to overflowing and the emergency spillway designed to carry the overflow is in danger of collapse forcing the evacuation of almost 200,000 people downstream from the dam.

It is the first time in the dam’s 50 year history that water has flowed down the slipway and it has unexpectedly eroded the slipway sending chunks of concrete flying and creating a 60 metre long, nine metre deep hole that continues to grow.

There are fears that further erosion could undermine the dam’s concrete weir and allow large, uncontrolled releases of water from Lake Oroville that would overwhelm downstream waterways and levees and flood towns in three counties.

Local newspaper, The Sacramento Bee, said it had been told that the spillway was rated to handle 250,000 cubic feet (seven megalitres) of water per second, but started to show signs of failure on Sunday February 12 when the flow was only 12,600 cubic feet per second (0.35 megalitres per second).

It appears that authorities should have been aware of the potential problem with the spillway.

According to the Sacramento Bee environmentalists raised concerns in 2005 about the stability of the emergency spillway, but state officials dismissed them and insisted the structure was safe.

“In 2005, three advocacy groups complained to the Federal Energy Regulatory Commission that using Lake Oroville’s earthen spillway would cause significant erosion because it was not armoured with concrete,” the paper said.

“They said soil, rocks and debris could be swept into the Feather River, potentially damaging bridges and power plants. The groups warned of a failure of the dam itself, threatening lives and property.”

And more reports are emergingthat bring the management of the dam into question. According to an Associated Press report, the dam’s 50 year operating licence issued by the Federal Energy Commission expired in 2007 and it has been operating under an annual licence ever since. The report said the dam’s operator, the California Department of Water Resources, had applied for a new 50 year licence in 2005. It did not say why the licence has not yet been granted.