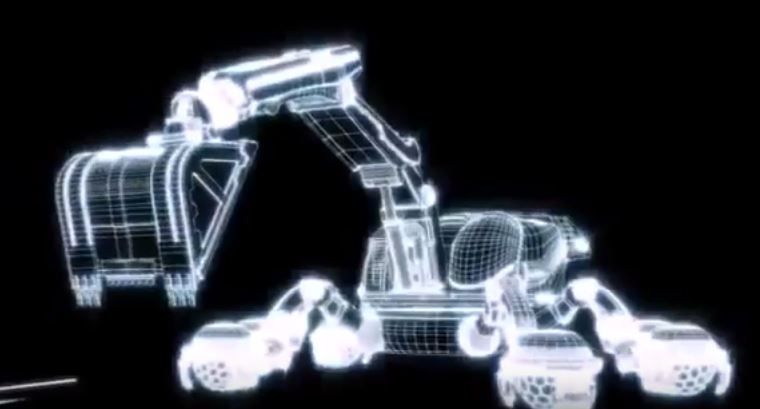 Technology never stands still. The Internet is only about 20 years old. Mobile phones only about 40, and smartphones with their plethora of applications only 10 years old.

Major manufacturers such as Hyundai and Volvo have videos on YouTube showing some concepts, and there’s a high degree of similarity in some aspects of their visions, most noticeably in the tracks. Here’s Volvo’s, and here’s Hyundai’s.

Gone are the two parallel rigid metal tracks that enable the excavator to be steered only by driving one or the other.

Instead there are four smaller tracks of rubber, or some future rubber-like material, that can move independently, rotate in the horizontal plane and in the vertical plane so the excavator can ‘stand’ on four legs.”

Another, even more futuristic concept, from Chinese manufacturer, Sany, replaces these tracks with four large rotating balls that can change their surface to suit the surface of the ground over which they are moving.

And get this. Instead of the superstructure of the excavator rotating on steel bearings, in Volvo’s excavator of the future if will hover, held aloft by a powerful magnetic field like a mag-lev train: zero friction and zero wear.

And of course the noisy, fossil fuel burning, air polluting diesel engine will be a thing of the past, replaced by a fuel cell that combines hydrogen and oxygen to produce water and electricity.

However, not everyone is impressed with the excavator of the future. Hyundai’s snazzy video on YouTube seems to have attracted mostly negative comments, such as:

“This thing is designed to break, and as eye candy for people that will never sit in a piece of equipment. The more parts there are and the more computerized it gets, the more expensive it is to fix.”

“It looks cool but in reality it would probably not work very well. It looks like it's been designed to work on Mars. I bet the people that come up with this design has never operated a excavator in the real world.”

But let’s leave the last word to Volvo. In May the company debuted what it said was ‘believed to be the world’s first fully electric compact excavator prototype.”

No word on commercial availability, or when the technology might be applied to larger machines, but it can only be a matter of time.