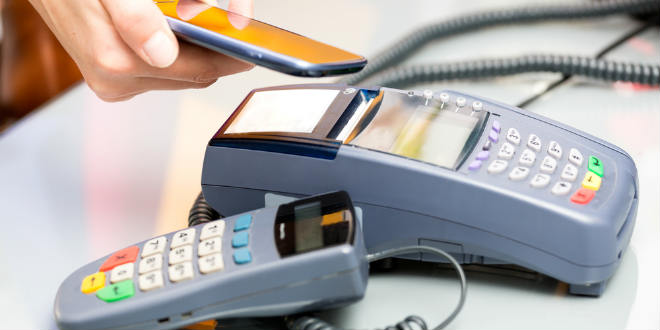 Deloitte is tipping more than a tenfold increase in the number of smartphones being used to make contactless payments: from just 0.5 percent of NFC-equipped mobile phones in 2014 to five percent of global population of some 650 million NFC capable smartphones by the end of 2015.

Deloitte, in its Technology, Media & Telecommunications Predictions 2015, says these phones will be "used at least once a month to make contactless in-store payments at retail outlets." Contactless mobile payment will not be mainstream by end-2015, but "niche adoption will be a major progression from near nil in prior years," Deloitte says.

In the longer term it sees take-up growing thanks to the additional security and the opportunity for retailers to use the functionality of the smartphone to increase engagement with customers. However, "While usage of phones to make contactless payments is expected to increase over time, they are likely to co-exist for some time with all other means of payment, from contactless credit cards to cash," Deloitte says. "It will be a long while before the majority of us can jettison our physical wallets."

According to Deloitte, "When someone pays using an NFC-device, the tokenization facility creates a unique code (known as a token) which is sent from the device to the merchant’s NFC-enabled till. The credit card number is not transferred. ... The token is only good for a single transaction and unusable otherwise. A fraudster who intercepted the transaction would only get access to the single-use token but not the card details."

Deloitte also envisages systems of greater sophistication and complexity - all in the interests of security "Using a fingerprint, an eye scan or a heart rate sensor as an additional form of authentication makes the payment more secure still."

And if this is not enough, Deloitte says: "All players should consider how contactless smartphone payments could be made even more secure. One possible way of doing this would be to use the location data routinely collected by smartphones as a security check.

Deviations from a normal purchasing location could trigger a request for further verification, such as PIN entry."

For retailers it lists four main benefits: "Reducing the need to protect customer data, the higher speed of contactless transactions relative to other payment means, the ability to attract consumers with higher disposable incomes, and the opportunity to provide more personalised experiences, for example by integrating loyalty schemes."

These and other user benefits might be key to driving consumer acceptance of the technology, Deloitte suggests. "For consumers, using NFC-equipped smartphones to make payments will be adopted only if it can make the payment process simpler, sleeker or provide specific incentive in the form of digital coupons or discounts."

Relevant: Preparation for the world’s premium IT industry certifications from Cisco, ITIL, Microsoft, the Project Management Institute and Oracle are included as an integral part of the Masters.
Accessible: Study for your Masters Degree in your own home. With over 32,000 students studying globally, Charles Sturt University is Australia’s (and one of the world’s) largest suppliers of distance education.
Accredited: All of our Online Master Degrees are fully accredited under the Australian Government Qualifications Framework.
Affordable: Australian Citizens can use Australian government FEE-HELP study loans facility to pay tuition fees.