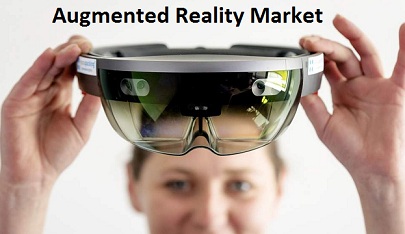 The Global Augmented Reality Market valued approximately USD 4.32 billion in 2017 is anticipated to grow with a healthy growth rate of more than 55.73% over the forecast period 2018-2025.

Global Augmented Reality Market valued approximately USD 4.32 billion in 2017 is anticipated to grow with a healthy growth rate of more than 55.73% over the forecast period 2018-2025.

The major driving factors that are concentrated with augmented reality are increasing penetration of technological advancements, growing adoption of E-commerce and retail sectors across the world and rising demand in healthcare. High implementation cost and issues such as less storage and slow processing are the major restraining factors that negatively impact the augmented reality market.

In addition, increasing awareness regarding tracking customer transactions, recording sales and calculating bills is boosting the growth of the market.

Augmented reality refers to indirect view of physical environment whose elements are augmented with inputs such as sound, video or graphics. Hardware sub-segment is expected to hold a major share of the augmented reality market by component owing to the increasing penetration of technology across applications.

Augmented reality is responsible for transforming the world of education and healthcare with its various applications. Due to usage of augmented reality results in increase sales and improve notoriety.

By taking advantage of augmented reality, the brand or the company can both attract new audiences and retain its existing customers.

Geographically, North America is the leading region across the world in terms of market share followed by Europe and Asia-Pacific region. Due to increasing technological advancements and rising popularity in augmented reality activated devices in North America dominating by US and Canada.

Whereas, owing to the countries such as China, Japan, and India, Asia Pacific region is anticipated to exhibit higher growth rate over the forecast period 2018-2025 due to major changes in technological adoption and advancements.