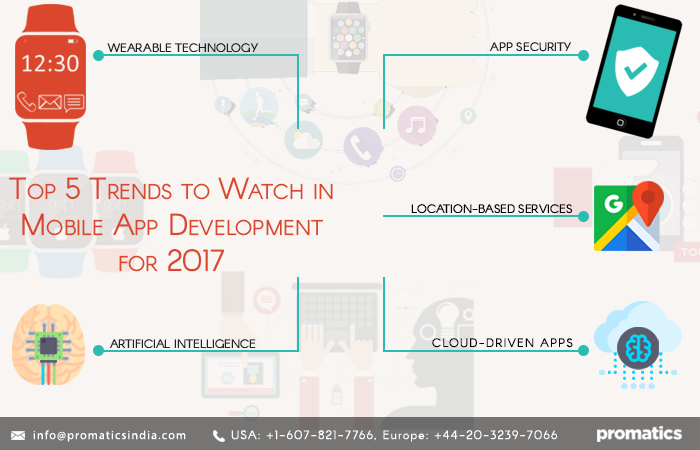 What are the most sought after trends for mobile apps in 2017? Clearly these 5 are in high demand. Read on to know more.

Smartphones are increasingly becoming an inseparable part of all our lives. With nearly 2.1 billion people in the world using a smartphone, it is no surprise that there is a surge in the number of mobile apps being used on a regular basis.

With the rapid growth in the usage of apps, it is estimated that mobile application will be more than a 100 billion USD industry by 2020. Today, apps are doing a lot more than making your smartphones smarter; they also help with your homes, cars, IoT-enabled devices and much more.

1. Apps for Wearable Technology, Augmented Reality and Iot Will Boom

The year 2016 has seen incredible innovations in terms of wearable technology wherein tech giants like Apple and Google have set new benchmarks in this space. Mobile apps will enhance the user experience and bring in more innovative and exciting features for users.

Apps are also the key to IoT’s success and they will significantly help in revolutionizing business processes. New sensors are embedded in smartphones for various operations, making it easily adaptable to consumers.

The mobile gaming industry has embraced Augmented Reality (AR) and created a beautiful new virtual world. App functioning will reach another level with AR as it touches other industries like retail, automotive, travel, restaurants, etc.

As per a report by Gartner, there will be a 300% increase in 2017 in the investment in AI compared to the year 2016. A number of AI apps like Siri, Prisma and Google Now are now being embedded in smartphones and they will revolutionize the way the industry works.

3. Security will be Critical

As technology is moving ahead at the speed of light, the reality of increasing security breaches cannot be escaped. App developers need to focus on a robust app security in order to ensure their users’ data confidentiality is maintained at all times.

Features like two-step verification for mobile banking, access to emails, etc. are becoming a priority for both, developers and users.

There is a wide demand for apps that are highly based on location-tracking functionality. With GPS enabled handsets, it has become easier for users to find real-time information related to their current location.

Industries where this feature is a boon include travel, navigation, retail offers, indoor mapping, navigation and more. A number of tech giants are investing in the LBS space at a high speed.

As location-based services tend to drain mobile batteries faster, hardware advancements will enable businesses to flourish in this area.

5. Cloud-driven Apps Are Constantly on the Rise

Everyone from customers to technology professionals has embraced cloud technology and its impact on our life. Mobile apps are now able to fetch your data from the cloud, thus saving a lot of space on your smartphone.

It is expected that by 2019, cloud apps will drive nearly 90% of mobile data, thus assuring that this trend is here to stay in the coming years.

Eventually, users want a premium and smooth app experience on their smartphones as they celebrate technological innovations in their daily lives. Developers are focusing on rich media and simplistic designs while keeping their customers a priority to make their mark in the app space in 2017.

If you too nuture any dreams of launching robust app development services that had brought smiles and satisfaction to many businesses. Are you looking to make your app presence to be felt everywhere? Do share your ideas or send in a Request for Quote.

We are waiting to launch your app on a global platform!

Promatics Technologies
Category: Mobile App DevelopersCompany about: Promatics Technologies is an ISO 9001:2008 certified mobile app development company based in India. With over 5 offices across the globe Promatics has been delivering native as well as hybrid apps for its clients since several years. Promatics has been time and again inculcated in the list of globally recognized and acclaimed app developers; by industry research firms and associations. It is no surprise as it has all this while demonstrated and showcased its ability to fabricate the most amazing ...
This email address is being protected from spambots. You need JavaScript enabled to view it.