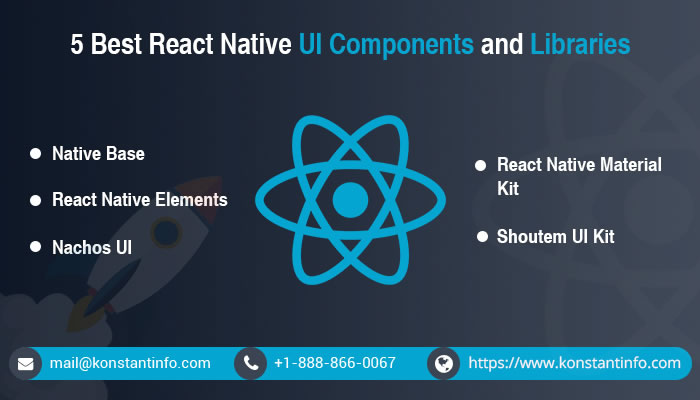 While some UI Components ease of the task at hand, others look quite buggy and blurring. Find out what suits to your React Native development needs.

React native applications are often being tagged as a mobile web app. It can either be a HTML5 app or a hybrid app that will allow you to code both in Android simultaneously at the same time on the same system. Although it is pretty much similar to a normal iOS or Android apps, a dash of JavaScript and React adds flavor to the dish. Besides quickening the deployment lifecycle and declarative self-contained UI components, it helps retain speed, quality, accuracy and actual flavor of native applications.

React Native Development does not require compilation and Hot Reloading. Native can be used on demand - One part of the application can be built in React Native and the other part of the Native code. Looking at the flip side of the coin, React Native suits more to iOS than Android. React native Developers make use of Atom and Sublime Text editors and ESLint error handling tool.

It needs more memory and higher CPU utilization than other frameworks. In short, React Native is:

Native UI widgets and components can be readily used in the latest mobile applications. While some of these components are part of the platform, others might be available from third-party sources. Here is a list of React Native UI Components

It is an open source and free UI component library built for React Native to create applications in iOS and Android platforms. The components offered by Native Base are written in React Native with some JavaScript that enables it for customization.

This is a set of UI components that provides effortless material design solutions for the React Native UI. This also provides an API to develop your own customized components.

Elements of React Native are built completely in JavaScript. It is a cross-platform to make users have a consistent design across Android and iOS. For the applications to look and function in the same way for both iOS and Android

Shoutem UI Kit allows users to build, manage and publish high-quality native iOS and Android Apps. Built on top of React Native, it consists of over 20 UI components that are aimed to solve real-world problems. Shoutem UI Toolkit makes it easy to use React Native components.

Nachos UI provides around 30 React Native UI Components that are freely available to use as plug and play in the application.

Konstant Infosolutions
Category: Mobile App DevelopersCompany about: Konstant Infosolutions is a renowned name in the modern IT space, delivering inventive business-centric web and mobile app solutions across latest technology verticals. Our idea of building virtual interfaces and automated supplies, keepsutility and purpose at the core of it. Which resonates with the fact that we have successfully built over 3500 projects serving over 2800 customers in our 15 years of engrossing industry experience. Binding Virtues: Our practice of seeking the best of quality ...
This email address is being protected from spambots. You need JavaScript enabled to view it.